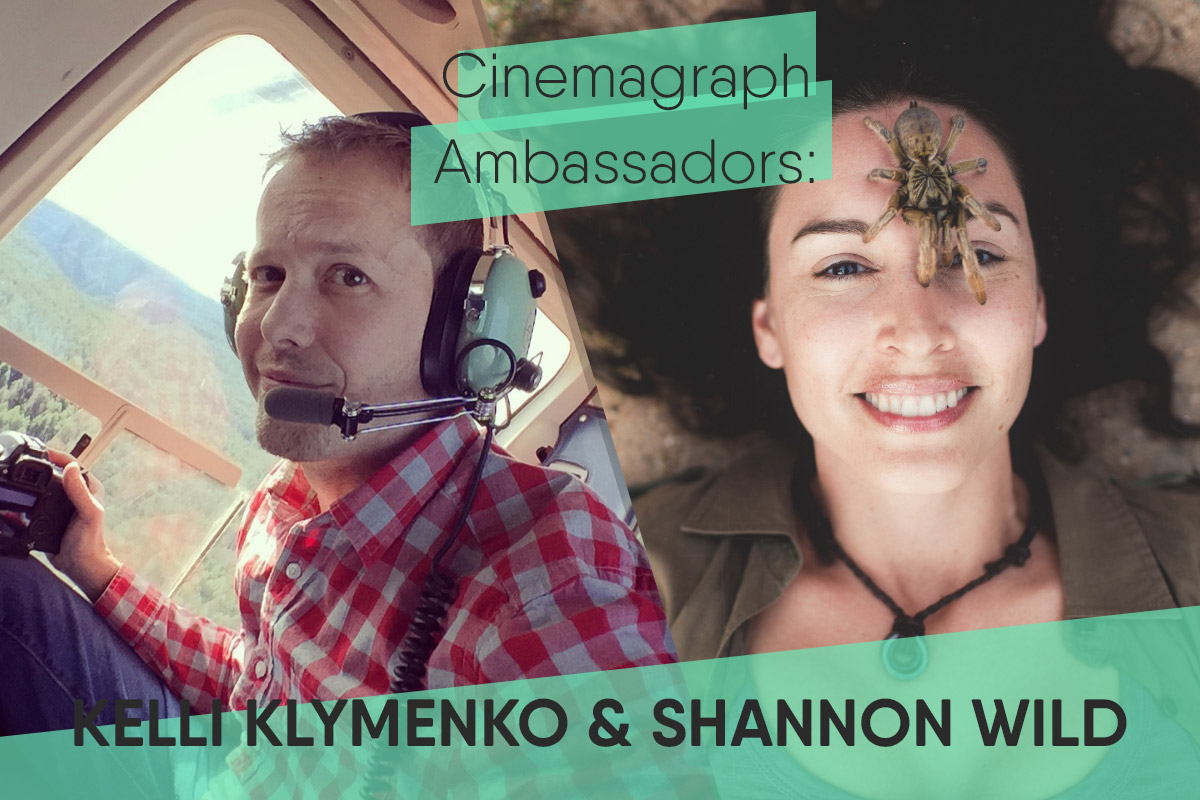 Leading social media personalities are now posting cinemagraphs on Instagram and Facebook! Get to know the Australian wildlife fanatic and the American nature enthusiast bringing cinemagraphs to your feeds.

Cinemagraphs have come a long way since these captivating loops were first given a name back in 2011. Social media has transformed them from a niche art into a widespread photography medium capable of hypnotizing all sorts of audiences, from the art-y to the business-savvy. You may have already encountered a cinemagraph or two in your Instagram or Facebook feeds, but if not – a quick search for #cinemagraph will give you a prime view of the action.

Being a photography influencer on social media today means experimenting with the latest creative mediums, tools and apps – including cinemagraphs. We’ve been keeping a close eye on two photographers, Shannon Wild and Kelli Klymenko, who captured our attention with their cinemagraphs of wildlife and landscapes.

We recently caught up with both of these talented ‘cinemagraph ambassadors’ to learn about their backgrounds and hear their thoughts on why cinemagraphs are a medium well worth exploring.

Like many influential photographers, Australian-born Shannon Wild developed her skill out of a passion for her subjects. In her case, those subjects are animals – and not the ones who can be easily tamed for the perfect shot. “I was a wildlife carer and often volunteered at wildlife sanctuaries. I didn’t set out to become a wildlife photographer,” she says. “In fact I was a graphic designer and art director for many years in Australia before taking up photography as a hobby.”

Wild eventually moved to Africa to immerse herself in the native wildlife. Despite being bitten, chased and scratched countless times, she pursued her creative hobby and earned a huge following of devoted fans. Wild first encountered cinemagraphs on Instagram and was immediately drawn to the medium’s functionality. “I started out as a still photographer and eventually moved across to cinematography as well. The fact that cinemagraphs combine the two holds great appeal for me.”

Photographing animals on a daily basis means that Wild is no stranger to the element of surprise. So it’s fitting that she also appreciates that same characteristic in cinemagraphs. “It’s nice to be able to still surprise a viewer,” she says. “I did one of a zebra drinking where only the reflection in the water was left moving. It tripped some people out!”

“It’s nice to be able
to still surprise a viewer.”
– Shannon Wild

Wild has begun utilizing time lapse photography footage for her cinemagraph loops, and plans to make more as the opportunities arise. She explains that her particular situation can be challenging, and we definitely understand why. “When it comes to making great cinemagraphs for wildlife, there are some specifics that need to be met,” she says. “That’s not always as easy as a more controlled shoot. My subjects don’t take direction or redo anything if I miss the shot!”

Based in Arizona but originally from the east coast of the US, artist Kelli Klymenko began developing his photography skills around 15 years ago through experimentation with a hand-me-down Olympus 35mm film camera. Fast forward to today: Over 350,000 people lay eyes on his landscape photos and cinemagraphs via Facebook.

Klymenko’s move to Arizona sparked a true passion for photography, although his fascination with nature began at age 12 with one unforgettable trip out west. “I’ve always loved nature and the joy of being far away from cities,” he says. “In Sedona, there are no bad views. It’s one of the most beautiful places on Earth and that’s no lie.”

For Klymenko, the most functional aspect of cinemagraphs is their unmatched ability to captivate a viewer. In today’s digital world of endless scrolling and information overload, even just a five-second pause is like an eternity. “When you want to make a statement and have someone stay focused on your art, a moving photo can really pull the viewer in. I’ve found myself staring at cinemagraphs for a lot longer than I would a still photo,” he says. “It also helps if it’s a serene place or beautiful natural landscape!”

“I’ve found myself staring at cinemagraphs for a lot longer than I would a still photo.”
– Kelli Klymenko

Klymenko believes cinemagraphs will play an even larger role in our lives as time goes on. As humans and technology are becoming increasingly intertwined with the exponential growth of social media and all things digital, cinemagraphs are a medium that expresses that fascinating relationship – blending organic elements with the power of technology. “Think science fiction – everything in the future is moving, everything’s a screen,” he says. “I think that eventually, we could conceivably see more moving photos than still ones.”

I’m Julia, a California-born content strategist, tech editor, and musician living in the vibrant city of Berlin. I enjoy exploring the intersection of culture, art, and technology – an interest that materialized during my studies of Anthropology at UCLA. When I’m not writing, I’m usually making noise on my guitar or adventuring around Europe.