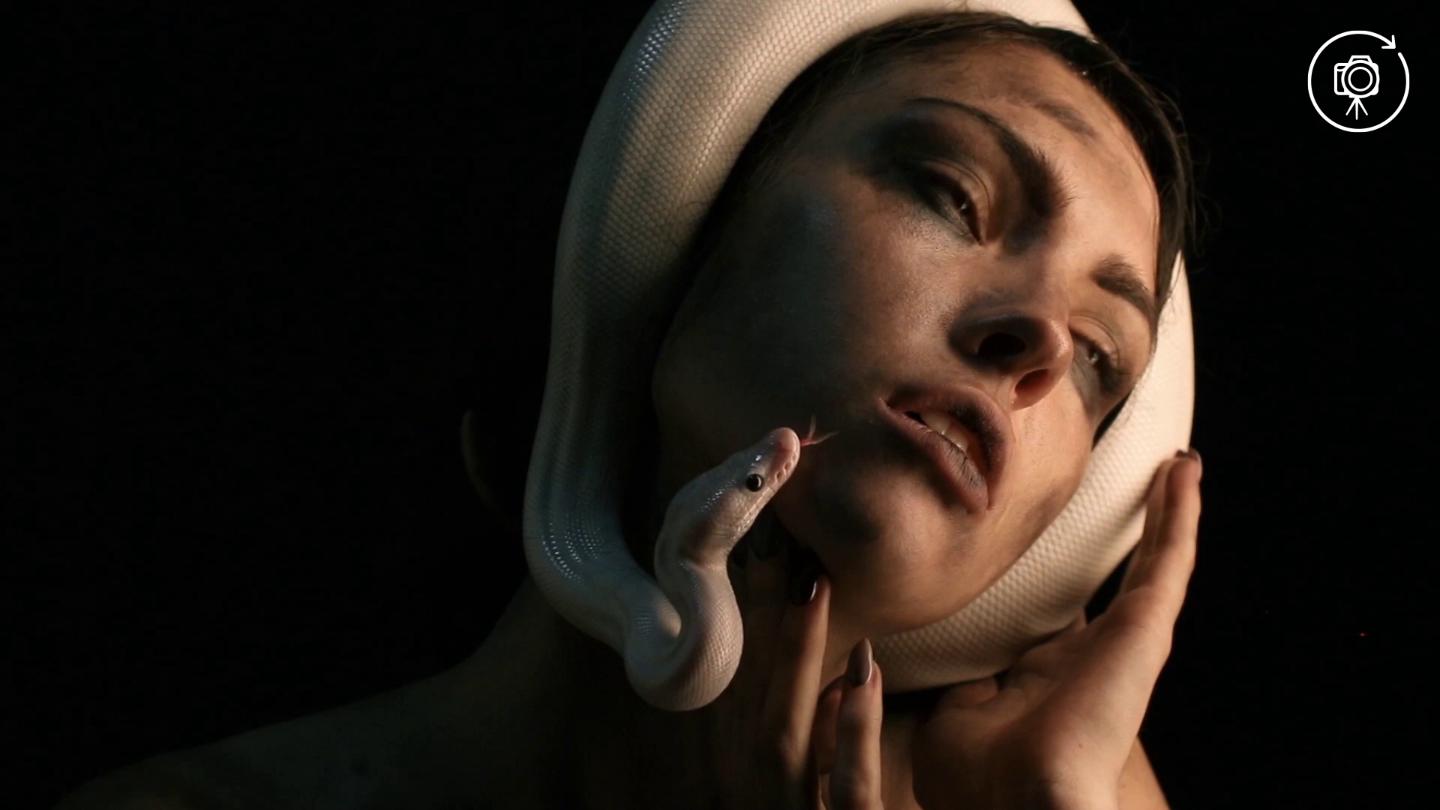 On Set With: Malik Daniels

If you’ve ever tried shooting a cinemagraph with a model, you’ll know how difficult it is to keep them holding still. Even the slightest of wobbles can make it difficult to match video footage and static photograph in post-production. Throw a live snake in the mix and you’ve got yourself quite a mountain to climb! Unafraid of a good challenge, gallereplay artist Malik Daniels mastered a studio shoot with a live snake to create his cinemagraph portrait of Eve from the biblical tale of “Adam and Eve.” We recently caught up with him to get the inside scoop…

gallereplay: Malik, this cinemagraph is entitled “Innocence of Eve”. Presumably there is some sort of biblical reference here? What’s the story behind it?

Malik Daniels: Since I began doing photography, I have always been obsessed with Adam and Eve, just based on their representation in art. Eve is so often portrayed with a heavy hand of symbolism and despair. I hoped that my interpretation would capture an approach that was fresh and a little bit lighter than the story of Adam and Eve.

gallereplay: So in some ways, you were reshaping the symbolism of Adam and Eve to your own artistic liking?

Malik Daniels: Yes, I hadn’t thought of it like that, but I guess you’re right. The goal was to create a look that was gritty and bold, but also beautiful and editorial. The photos have Brittany’s (ed: the model’s) face hidden or covered by the body of the snake, at times facing away from the camera and rarely making eye contact. This worked very well for capturing a dark mood, and helped me to project a different perspective of Eve, as she had to find another way to connect through the eyes. Her expression is not happy nor distraught, it’s in the present, and that focus made me want to stay with the image longer. I felt that the cinemagraph’s power to keep the viewer’s eyes locked on it, is its most successful element.

A shot from Malik’s photo series with Britanny

gallereplay: We must ask, as you never know given what’s possible with Photoshop nowadays – is the snake actually real?

Malik Daniels: Yes! Marius is Brittany’s pet snake. As Brittany and I swapped ideas about the shoot, she mentioned Marius. I was captivated by the idea of using a snake in the shoot. We worked around the concept, the poses and when we found a comfortable place in the shoot, we stopped to work on the cinemagraph. Since they’ve spent so much time together the snake became comfortable in the studio setting rather quickly.

gallereplay: Did Brittany mind having Marius wrapped around her face?

Malik Daniels: No not at all. As you can imagine, she’s very comfortable around him. Marius wrapped himself around her eyes, near her mouth and around her neck. His constant motion never gave any issue and allowed her to actually play off of his positions and make for stronger compositions.

Brittany poses calmly as Marius smiles for the camera!

gallereplay: Did you face any challenges on set or was it all “smooth sailing”?

Malik Daniels: It was tricky to get Brittany still enough to capture the footage needed to make the cinemagraph. Obviously, no discredit to her – she did have a snake wrapped round her face! Jacqueline (our make-up artist) worked on the placement of the snake, but it was finding the right method to give enough time to freeze the motion that was most difficult. Marius moved constantly as the studio got warmer. This in turn meant he interacted with the camera, literally getting up to the lens and staring at his reflection. Though typically, the moment I would begin recording, he would hide behind her head. So, together we worked tirelessly to bring him out, whilst accumulating enough time for Brittany to pose frozen. Thankfully, it worked out pretty well in the end!

Check of Malik’s gallereplay profile for more of his cinemagraphs!