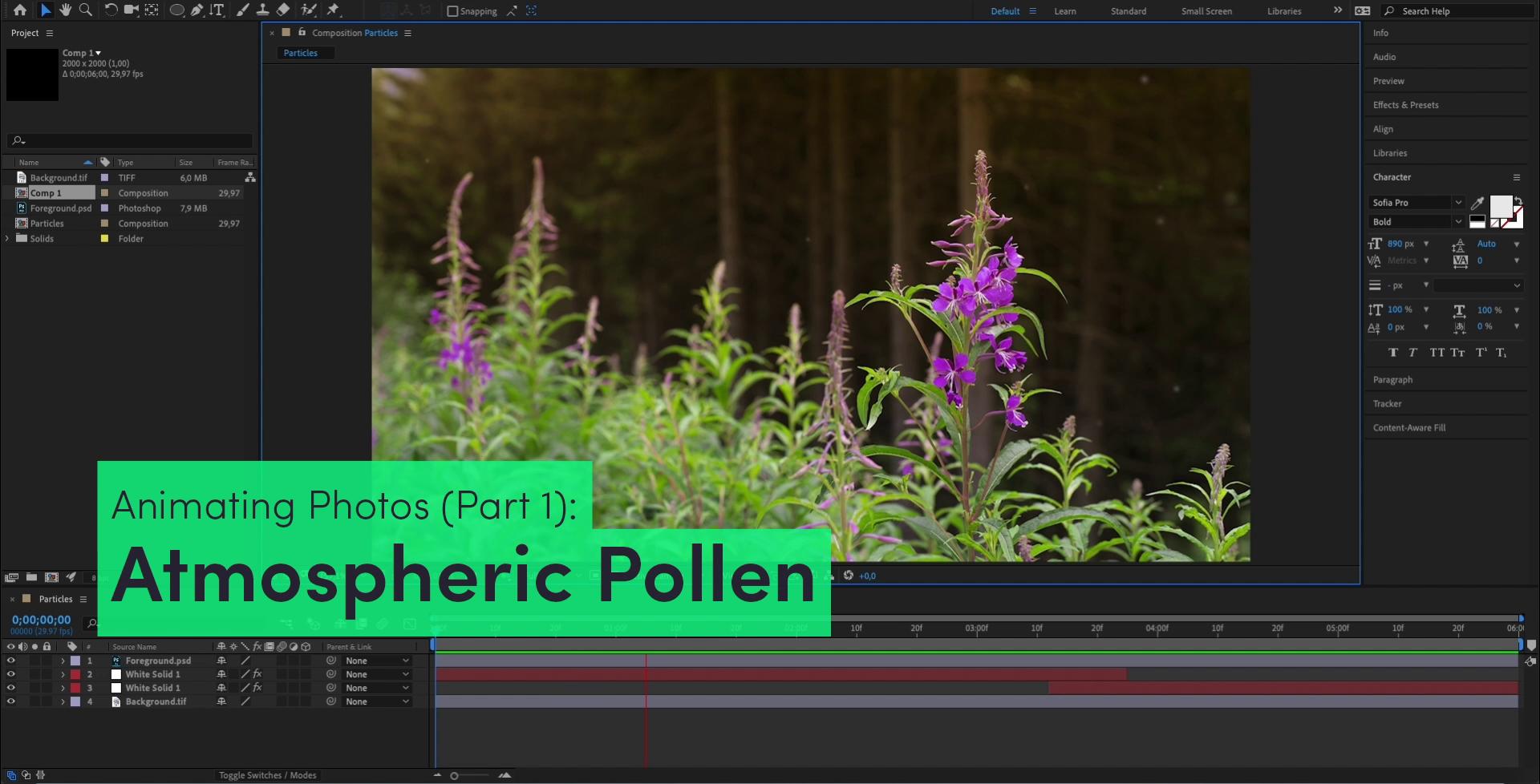 Animated photos are a popular alternative to video based cinemagraphs. They offer the possibility to bring even still images alive. One of the most popular programs for this is the post-production and animation program Adobe After Effects. In this first part of my two part series of AE tutorials I give an introduction to the program and explain the commonly used floating dust particle effect, which you can use in your photos to transform them into loop videos.

In contrast to Adobe Photoshop, which primarily introduces itself as a photo editing program, and Adobe Premiere, of which the focus lies on video editing, Adobe After Effects is a composting and animation software. It is used to produce visual effects (vfx), motion graphics and animations. If desired it can also be combined with camera produced content. In many areas there are similarities with fellow Adobe suite programs Photoshop and Premiere, meaning that it will be easy to adapt if you have prior knowledge with either of them.

In the following software tutorial we will look at the particle system, one of the many fundamental tools of the program which enable us to produce animations. I will explain this by creating an atmospheric dust effect. By changing the parameter you can also produce further effects with the volumetric particles such as snow or rain.

The program offers many possibilities for creating particles. Below we will look at the tool “CC Particle Systems II”, which I recommend for the creation of the pollen. As the name suggests, one can produce particles with the effect and adjust them using various parameters. For example, the size, the type of particle, the speed or direction. Here, for instance, we are able to build big, flaky particles like snow, which sink to the floor, or small ones that float through the air.

Creation of the Composition and Layers

This way the composition is created with the correct settings, the pictures are imported and the volumetric particle effect is applied.

Adjustment of the Effect

Now it is time to influence the emitter through the operating panel “Effect Controls”, which already has been opened. In the following, I will give you some recommendations for the settings. However, it might be worth playing around with it as the adjustment also depends on the picture to which you integrate the pollen. You can view the effect anytime by pressing the spacebar. 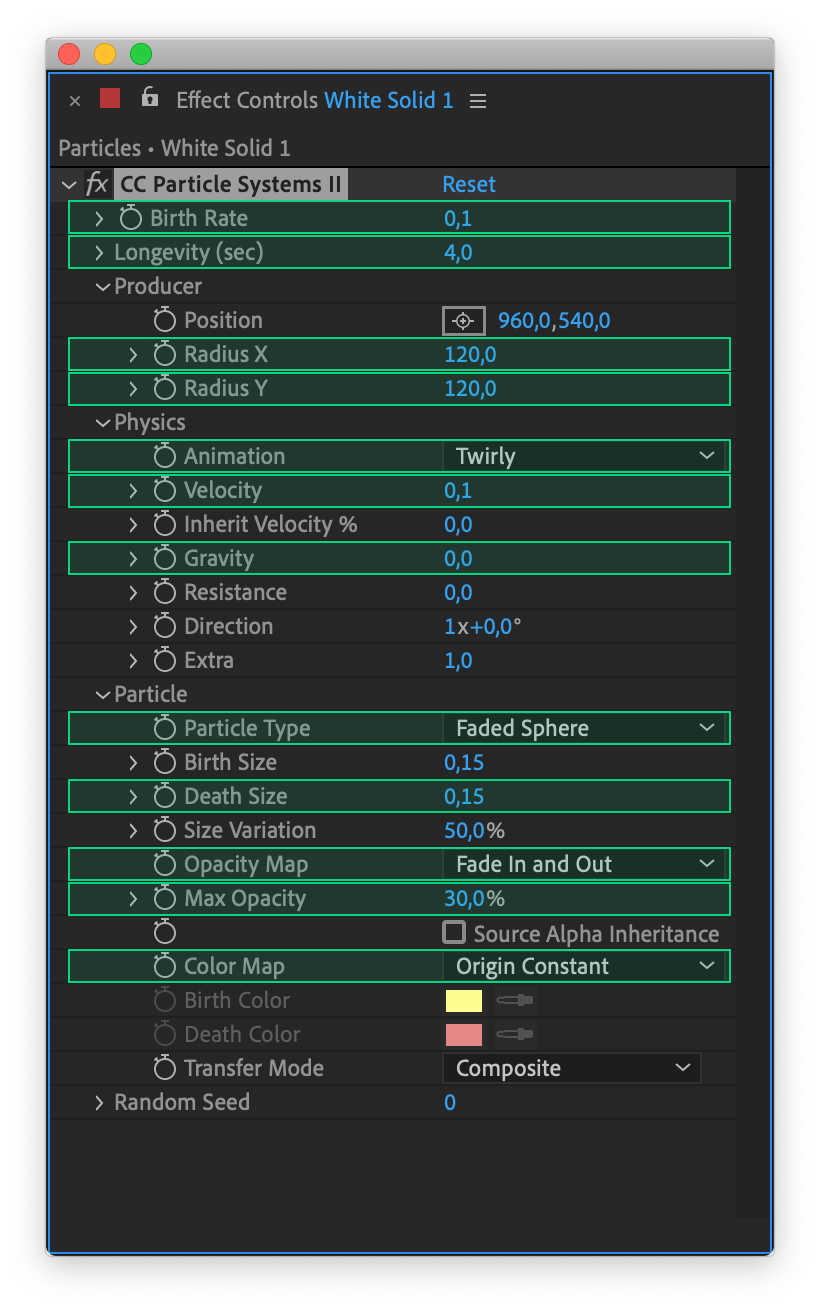 I recommend using these adjustments after the application of the effect.

Through this change we will enlarge the emitter and spread the particles over the whole image.

This change will lead to the optimal adjustment of the particles. The type of particle will be changed by making it smaller, leaving it to blend in and out, reducing its opacity and ensuring it takes on the color of the solid layer (white). The other settings already have the fitting values by default.

Here we change the type of movement and ensure that the particles move slowly and are not pulled down by the source of gravity, but instead are carried around freely by the wind.

Birth Rate: 0,1
Longevity (sec): 4 (any values can be entered into this input field)

Through the adjustment of these controls we reduce the number of particles and give each of them a 4 second life time.

Last Changes, Transformation into a Loop Video and Rendering

How to optimise a video and convert into a loop video

Then we move our effect layer under the masked layer (if this exists), so that the effect will not be used all over the image. Whoever already knows After Effects, can of course create masks directly in the program.

To optimize the video for the endless loop, we split the layer with the effect again in the middle (Ctrl+Shift+D/ Cmd+Shift+D) and then move the layer that’s located higher, from the end of the timeline to the beginning of the timeline, and move the layer at the beginning of the timeline to the end, i.e. we swap the two parts. Then we extend the upper layer to the right for about 1 second. In the scope of this newly created overlap we blend in the upper video and show the lower video. We do this by “Transform” > “Opacity” (see below video).

The atmospheric particle animation is finished! You can now prepare your video for render by the menu item “File” > “Export” > “Add to Render Queue”.

When you have selected your storage location and export settings, you can click “Render” to export your video.

And that is our result:

I’m Yugen and I work as a videographer at gallereplay. I have loved working on film since an early age and love to tell stories with images. Alongside my work as a filmmaker, I also started a podcast about filmmaking in Germany.